Little has been written about La Verrerie Ouvriere d’Albi (VOA). Although this company was a late starter in the manufacturing of glass insulators, they did begin producing CD640’s and CD642’s in 1917.The history of the company began in 1752 in the town of Carmaux, 15 kilometers north of Albi. In the beginning, the company operated under several different names before it became La Verrerie d’Albi. The Solage family in Carmaux owned coal mines, an iron mill, and a glass factory. In 1754, the Verrerie Royale de Carmaux was founded by Chevalier de Solage. Between 1758 and 1849, the Verrerie produced wine and champagne bottles. In 1856, the Solages rented the bottle company to a bottle merchant from Toulouse, Monsieur Fernand Rességuier. In 1862, Monsieur Rességuier bought Verrerie Royale de Carmaux from the Solages and renamed it Verrerie Sainte Clothilde.In 1864, the arrival of the railroad brought industrialization to Carmaux. The lines connected Carmaux to Albi and Toulouse.The early years of Verrerie Sainte Clothilde were not without strife. The workers were nomads moving from factory to factory, area to area. There were many strikes both in the mines and the glassworks. One strike in 1895 lasted for many months and the Mayor of Carmaux, Jean Jaures, tried to reach a compromise but failed. An idea was born to form a glassworks that belonged to both the workers and the unions. Subscriptions (donations) were taken up throughout France to find enough capital to build a new verrerie. The land was bought on Avenue Dembourg in Albi through a donation of 100,000 gold francs from Madame Dembourg. Jean Jaures, the Mayor of Carmaux, led the building of the glassworks. In January 1896, a band of men with picks and shovels started work on the new site, and through many obstacles and with a lot of hard work, the first furnace was lit on December 3rd, 1896. The workers’ glasswork La Verrerie Ouvriere d’Albi (V.A.) was born.

Over the next fifteen years, more furnaces were put into operation, and in 1913, a fourth furnace was lit and the production of bottles increased to 880,000 per month. During the 1914-1918 war, only one furnace was operating and in 1917, the factory began to make glass insulators for France’s National Defense. With this contribution to National Defense, the Verrerie was allowed benefits for certain priorities concerning fuel and the transportation of raw materials. An engineer working at the factory, Monsieur Spinetta, suggested that the Verrerie manufacture glass insulators by machine. This plan was adopted and production began.

Color variations of CD640’s.
Several of the following photos show a line (marking) around the head of the insulator, possibly a mold impression. Those with this line have all been found in Morocco. They have no embossing and were more crudely made than those manufactured at V.A. factory. 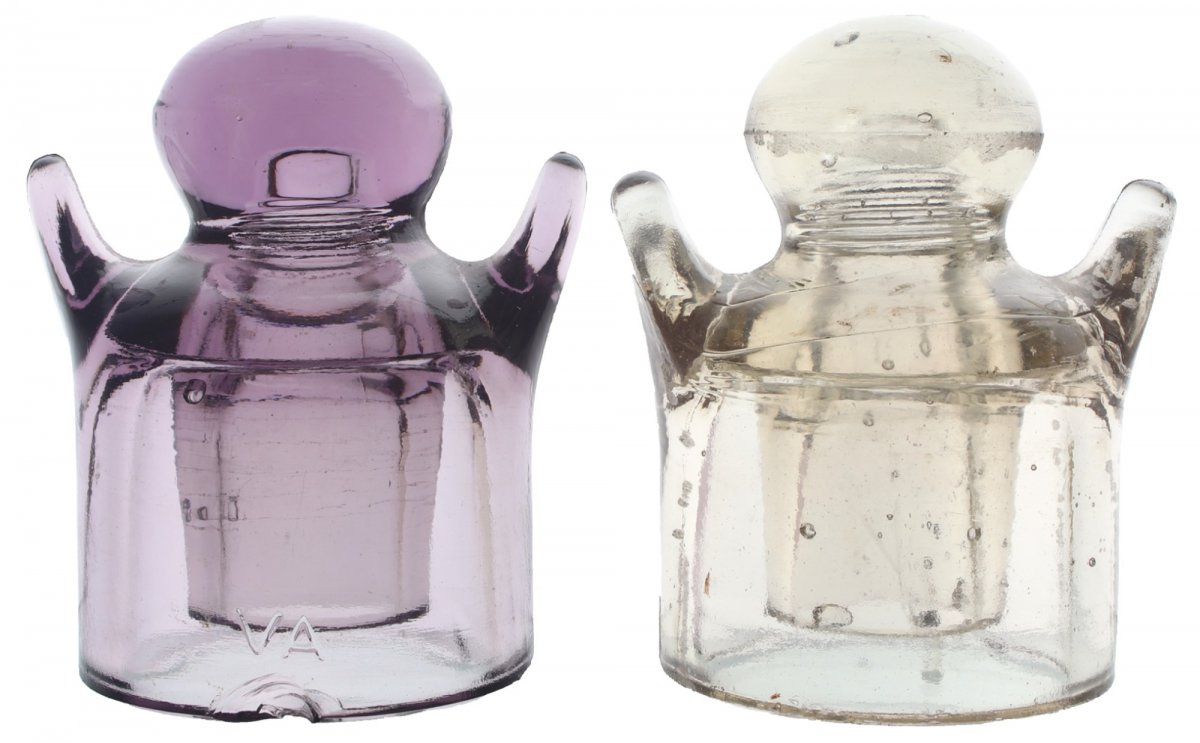 Bottom row: The CD640 on the left is green-black, the middle CD640 is dark amber, and the one on the right is black-amber glass and it is the only one known. All of these have a “V.A.” embossing and these are very rare colors to find. We have had these in our collection for about twenty years. 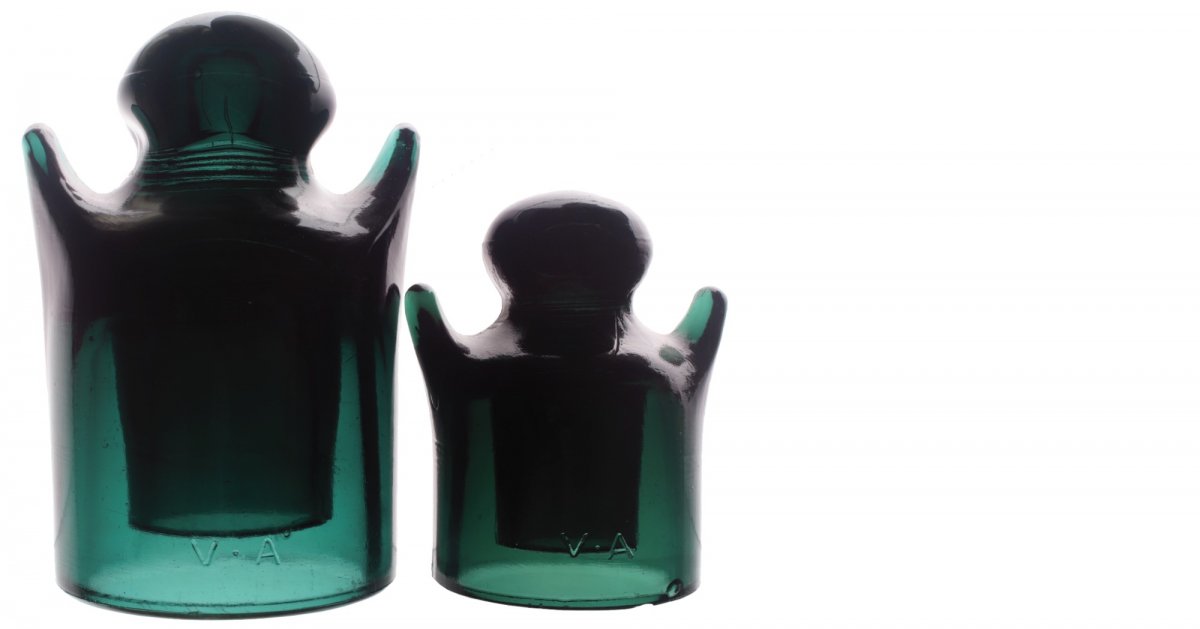 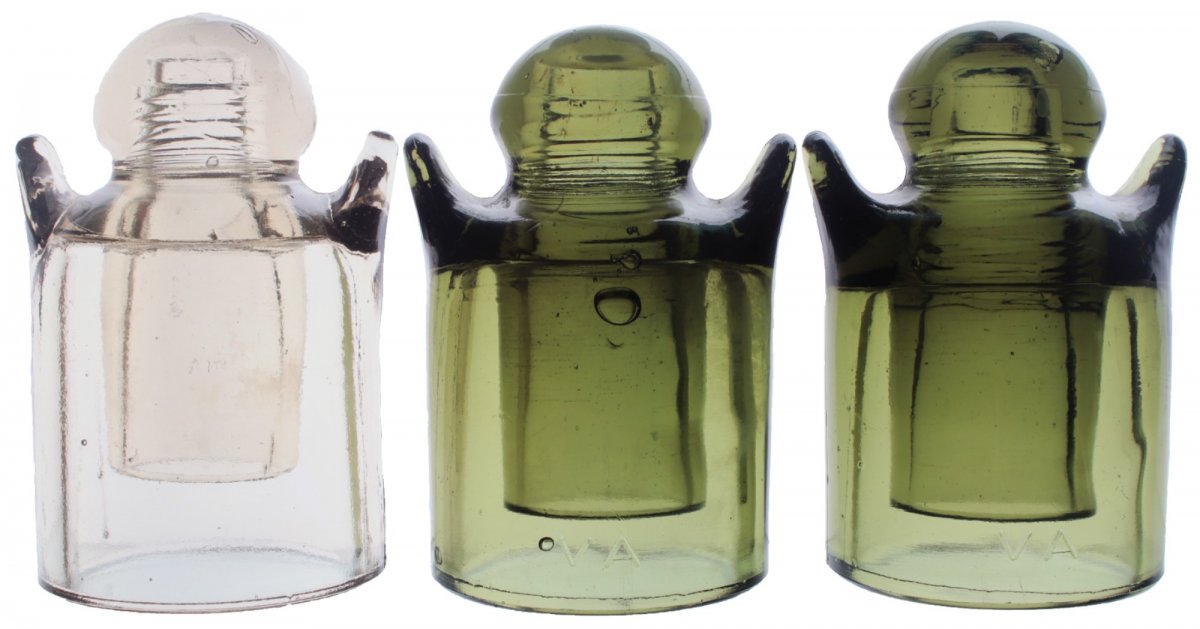 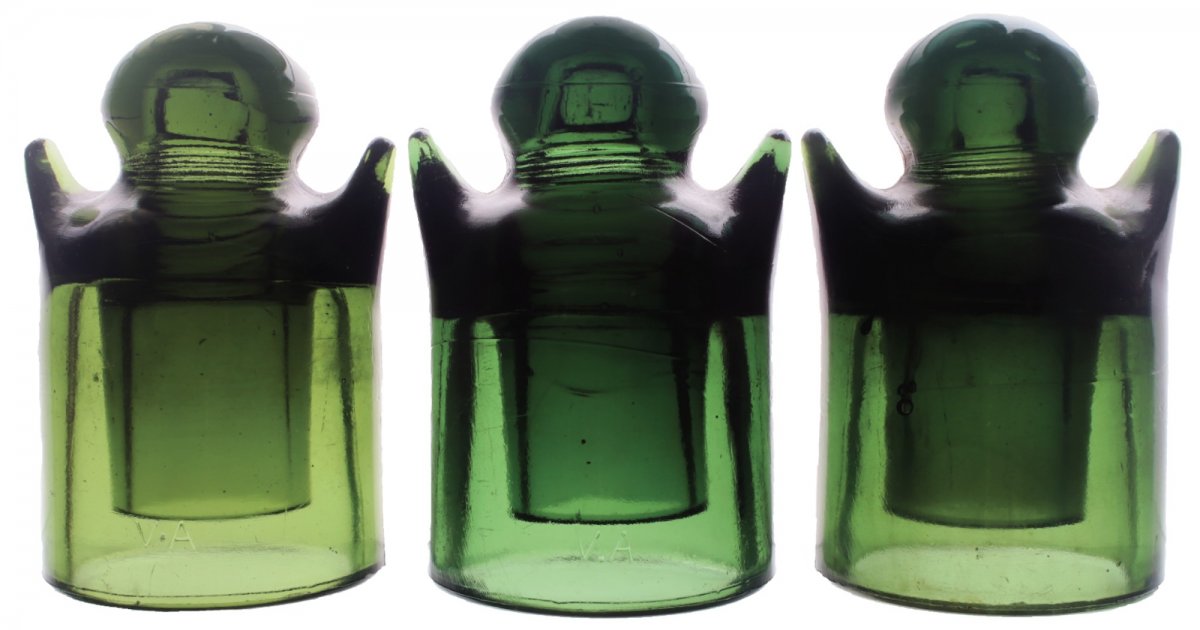 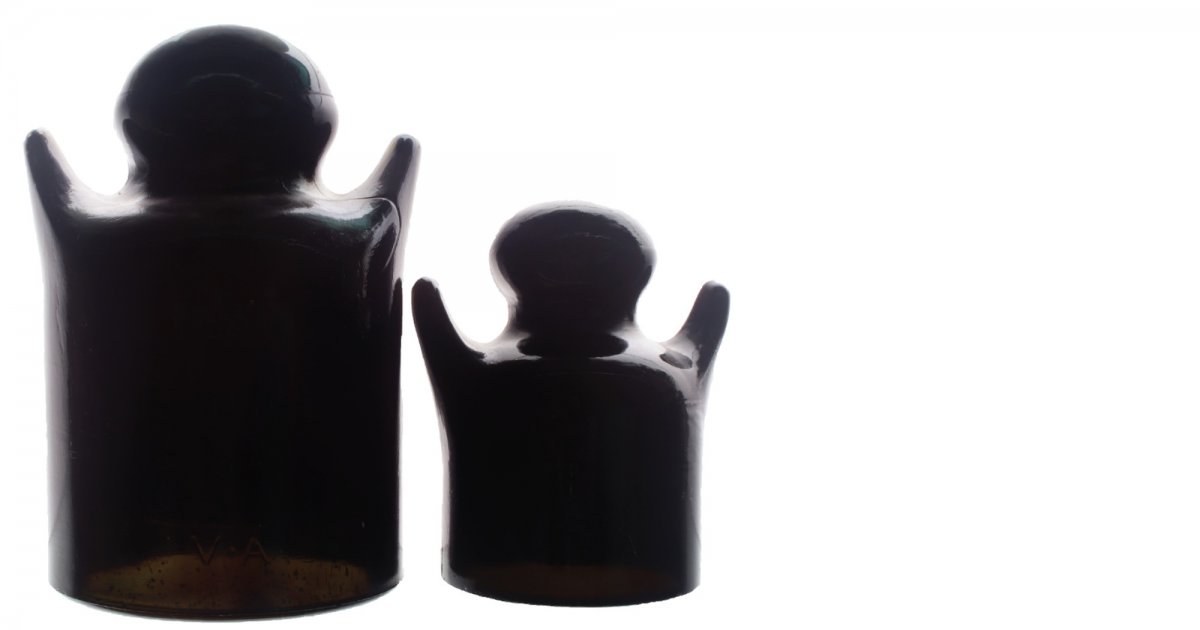 The CD642’s on the bottom row are both black-amber glass, although the one on the right is darker. Both are embossed with “V.A.” and are very rare.Some of the CD640’s and CD642’s were very crudely made, with a distinct ridge around the head. These were found in Morocco several years ago. None of the Moroccan insulators were embossed and the manufacturer is unknown. The glass “arms” on the Moroccan insulators are thicker and straight whereas those made by V.A. show a definite curve. Over the years, several of the purple CD640’s have been seen in France but none have been retrieved. The purple CD640 has only been found in Morocco.

Color variations for CD545’s.
The CD545’s were manufactured in a good array of colors with many shades of purple and amber.

The insulator on the far right is classified as a CD545 but it has a pronounced half-inch-wider skirt than any of the other CD545’s.

Only one other model of insulator was produced by La Verrerie Ouvriere d’Albi – the CD551. The insulator on the right is possibly the only one known. We have seen several others but they have been inaccessible to retrieve.  They are embossed with only “V.A.” Italy made a similar insulator in purple with the embossing “FIDENZA.”

Over the years, La Verrerie Ouvriere d’Albi was continuously with unrest. In 1921, one of the furnaces was closed and salaries were reduced by 20%. In 1923, semi-automatic machines were installed for the production of bottles. In 1926, three modern furnaces were equipped with semi-automatic machines by Boucher and Roirant. These furnaces differed from the first ones and the fourth furnace was never rebuilt. The workers were granted better ventilation in the furnace work areas, as well as better lighting. Baths and toilets were also built.In 1927, bottles were no longer blown; they were produced automatically.  On March 3, 1948, Saint Gobain signed an accord with La Verrerie Ouvriere d’Albi that allowed them the use of ten patents for the manufacturing of bottles. On January 18, 1998, Saint Gobain bought La Verrerie Ouvriere d’Albi.During a period of about 40 years, La Verrerie Ouvriere d’Albi manufactured only a few models of glass insulators, but they were the only glass insulator manufacturer that made insulators in a wide array of colors. CD640 and CD642 “gingerbreads” were made, and following that, the CD545.  In 1955, Verrerie Charbonneaux registered a patented machine (Patent No. 1131077) where the “ears” on the “gingerbread” insulators were no longer part of the insulator. These insulators became the CD545. La Verrerie Ouvriere d’Albi followed using this new machinery.In 1984, La Verrerie Ouvriere d’Albi closed the factory on Dembourg Avenue.  A large portion of the buildings were either partially demolished or unsafe for use. Only one building still stands at the old factory site, that of the Musée de la Verreries.  In 1998, we were allowed to visit the Musée.  However there was little to see but a few old chairs inside the building. No artifacts were seen but a beautiful mural remained on the wall – “Les Etapes de Jacques Bonhomme” by William Laparra.  The colors were still well preserved.

When asked about any artifacts, we were told that no one knew where or if there had been any preserved. We have heard that story before.  We have not returned to the Musée nor the old site since our 1998 visit.Today, production of only bottles is done at La Verrerie Ouvriere d’Albi (VOA) factory in Saint Juery. We have also visited this factory and they have little to show that they ever made insulators. 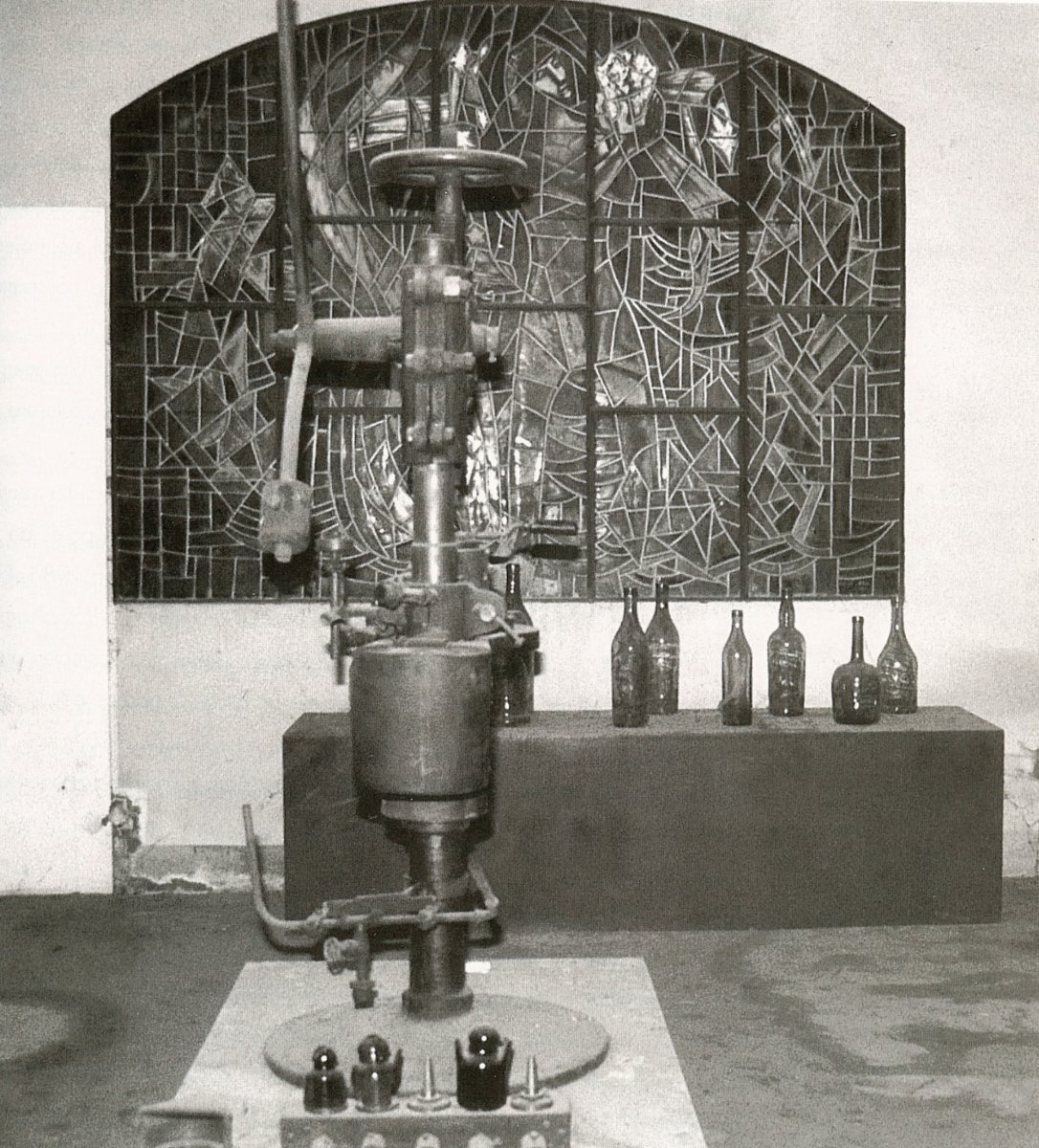 A display of bottles, bottle-manufacturing machinery, and several insulators – a CD640, CD642, and CD545 at the VOA factory in Saint Jeury. I took this photo many years ago and during our visit, we gave the manager several CD640’s for their display. Albi is an interesting city and well worth a visit. The cathedral is incredibly beautiful. It took 200 years to build it in brick, not stone.